Advanced Headsets Give Law Enforcement an Advantage by Staff Editor

Clear, decisive communication is key to resolving an active shooter incident with the minimum number of casualties 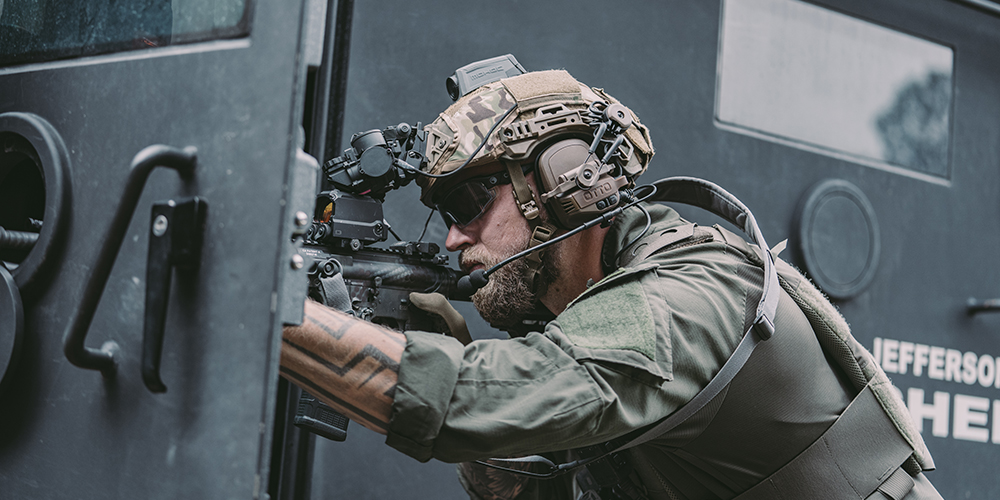 When the call goes out that an active shooter incident is in progress, law enforcement immediately shifts into high gear. Officers converge on the location, each one with a shoulder-mounted speaker microphone loudly broadcasting instructions from command. Reports about the situation pour in, some providing accurate details, while others are not so accurate. Crowd control and bystander safety may be a concern, medical care for injured victims must be coordinated, and shots may even be fired toward law enforcement. In short, the situation can quickly become chaotic.

As law enforcement prepares to enter the building, each officer grabs essential gear from the back of his or her patrol car including a rifle (if their department issues rifles) and a go-bag packed with extra ammunition, medical supplies, perhaps a knife or multitool, pepper spray and other helpful items. More often than not, the tactical gear does not include a communications headset that gives the officer the ability to hear commands clearly and silence the speaker mic while providing essential hearing protection for close-quarter gunfire.

As we learn more and more about how best to tackle active shooter incidents, it becomes evident that advanced headsets offering high-performance hearing protection with essential communications clarity should be included in every officer’s tactical go-bag.

A Growing Problem
An active shooting incident is a community’s worst nightmare. Immediately thoughts go from, “That will never happen here,” to “Why did this happen here?” It goes without saying that every law enforcement department in every community hopes it will never happen in their community, but the sad truth is that the incidence of active shooter confrontations is on the rise.

According to the FBI, 21 states around the United States, from California to Maryland, experienced a total of 50 active shooter incidents between 2016 and 2017, ten more than in the previous two-year period.[1] In 2018, the FBI reported a total of 27 incidents in 16 states.[2]  California tops the list with nine incidents from 2016 to 2018, followed by Florida and Texas, each with 8.

These are frightening statistics. But for law enforcement, the data gets even worse. Between 2016 and 2018, a total of 38 law enforcement officers were wounded or killed in 15 of the reported 77 incidents. That means that in nearly 20 percent of these incidents, officers were hit by gunfire when responding to an active shooter incident. In 2019, five officers were shot within just 10 minutes on the scene at an active shooter incident at a factory in Aurora, Illinois. It is safe to say that incidents of public shootings with several casualties continue to increase, putting law enforcement in peril more often.

Law Enforcement Response
The first officers on the scene in response to reports of an active shooter are expected to attempt to subdue the shooter immediately to protect the safety and survivability of the victims. Before the Columbine shooting, patrol officers and security guards were trained to wait for the SWAT team to arrive.[3] Unfortunately, first responders are literally taking their lives in their own hands, as shown in a study of active shooter incidents between 2000 and 2010 done by Professor J. Pete Blair of Texas State University. According to Blair’s research, “In all the solo entries we identified where the scene was still hot, one-third of the police officers who made that solo entry were shot.”[4]

In part as a result of Dr. Blair’s study, most law enforcement agencies have mandatory active shooter response training for all officers to prepare them with the knowledge and skills to mitigate the risk to themselves and others should they be the first to arrive on the scene. This type of training has helped patrol officers be more prepared to face an active shooter. However, the fact remains, most patrol officers are not outfitted or trained to use the specialized tactical gear usually issued to members of the SWAT team like rifles, advanced communication equipment, and state-of-the-art hearing protection.

Patrick Siewert, an active shooter response instructor, and principal consultant for Pro Digital Forensic Consulting, LLC, explained, “Active beat cops are typically the last to get advanced equipment. We know a rifle is the best response to an active shooter, but we teach to the basic level and only incorporate handguns in the shooter response training because many officers can’t get rifles. In fact, most cops have no idea exactly how loud that rifle will be when you deploy it live, indoors, without hearing protection. It will severely affect the hearing of the person shooting the rifle as well as others nearby, which will then compromise their ability to perform the mission.”

Law Enforcement Challenges
Let’s look at a hypothetical scenario. Police are alerted of an active shooter at a local business. Nearby patrol officers arrive on the scene while SWAT gears up. The first-responders are equipped with their standard daily uniform including a radio and shoulder-mounted speaker mic for communication with command, a handgun, bulletproof vest and go-bag prepacked with their special response tactical gear in their typical go-bag as described earlier.

As the officer enters the scene, people are shouting, victims may be screaming, perhaps the fire alarm or sprinkler system has been deployed, and the shooter may target the officer. Moreover, the officer’s shoulder-mounted speaker microphone continues to broadcast all the instructions from command, potentially alerting the shooter to every move planned by law enforcement.

Of course, some officers may have an earphone attached to the speaker mic, silencing the incoming transmissions, solving the broadcasting problem, but creating another issue for the officer, particularly if a foam earplug is utilized in the other ear to protect hearing. The earphone and earplug will reduce the officer’s situational awareness by limiting the ability to hear the sounds around him or her. The inability to maintain situational awareness will severely affect the safety of the officer in a fast-evolving, highly chaotic and dangerous environment.

Without hearing protection, there’s a risk of short and long-term hearing impairment. With typical hearing protection using a foam earplug in combination with an earphone from the speaker mic, there’s no situational awareness, putting first-responders at risk of mistaking other officers coming from behind for the shooter, or worse, being ambushed by the shooter. In short, the risks are great if communication is impaired or not managed effectively.

New Headsets Improve Essential Communication
“The consistent thing we spread across all the training classes is the need for effective communication,” said Siewert. “Officers all have to be able to talk to each other. It must be clear that messages have been sent, received and acknowledged. You need the communication loop. Without the loop, it sets you up for a blue-on-blue shooting. If an officer is hearing impaired one way or another, it will affect how well communication works.”

A headset that plugs into the officer’s speaker mic and protects hearing without inhibiting situational awareness solves virtually all the communication issues faced by a patrol officer suddenly thrust into an active shooter situation. A headset like the NoizeBarrier® Range SA is compact enough to be kept conveniently in an officer’s go-bag to have on hand should the need arise. An officer can transition easily from a headset that is used during firearms training at the range to gearing up for a tactical situation in an instant.

The NoizeBarrier® Range SA plugs quickly into the earphone jack of the officer’s speaker mic to listen to incoming transmissions without broadcasting to the shooter. A simple push of a button on the left earcup turns on the situational awareness microphones to provide a full 3D soundscape and allow the officer to hear and pinpoint the location of all nearby sounds, even as soft as a whisper. When shots are fired, the Range SA protects the officer’s hearing without clipping or cutting out the commands transmitting from the radio via the speaker mic connection.

Conclusion
When faced with an active shooter, police officers put their lives in peril to protect the community they serve. It just makes sense to provide them with the equipment they need to protect themselves as much as possible. Adding a communications headset to every officer’s tactical go-bag will not only improve communications, it will also protect the officer’s hearing and improve the effectiveness of his or her performance in chaotic, evolving and dangerous situations.